Home » Get to Know Harbour Island » Meet the Locals » Joe Saunders, “Don’t Build’em Like they Used to”

Joseph Saunders has been building and renovating the homes of Harbour Island since 1945. He had a hand in renovating some of the historic homes you’ll see on and just off Bay  Street such as turquoise-trimmed Miss Lena’s, pink trimmed Strawberry House, and the yellow Little Boarding House at the corner of Bay and Murray.

What he loves about working on these old houses, he says, “is the chance to experience the way people used to build.” Instead of nails, they used mortise and tenons: placing a post into an indentation in another piece of wood. Posts were held together with pins of white torchwood.

Joe says these older houses keep cool in hot weather and are safe in storms. “Nails can crack the wood and cause it to loose strength,” he says. “But with those wooden pins, a house would twist before it would fall.”

Joe says owners of these old houses want additions to look as much as possible like the original houses. “I do the best I can,” he says. “But the materials are different. I can imitate the look by beveling a 1 x 12 on each end, but it takes forever and still doesn’t look exactly the same.” 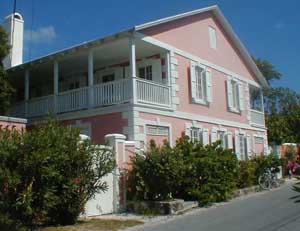 The old stone houses were built by quarrying  limestone on the site to carve out the basement. Then the stones were used for the foundation or the whole house. “And even though that old plaster is soft, it holds together  well,” Joe says. “It’s probably the way they used to make the lime: they burned wood and conch shells then added water to the lime and let it sour. That kind of lime brings the sand alive when you add it to the plaster.” You can see stone houses built with these techniques at Java House and Lemon Tree at Clarence and Bay Streets. The Harbour Lounge, Bahama House, and Blue Rooster show their stone foundations.

Weddings at a haunted house

Asked about his favorite project, Joe thinks back to his very first job. He was 17 in 1945 when G. Higgs from Nassau built for Glen Stewart what has since come to be known as the Haunted House on the south end of Harbour Island. “It was marvelous–something out of the ordinary that had never been built here,” Joe says. “It had arches and drag molding, and instead of tile floors it had floors of limestone cut on Eleuthera. I sanded and sanded those floors to make them smooth,” he recalls. Fire destroyed the house in the 1980s, and shrubs growing over the ruins gave the place a look that led to the name haunted house. A candlelit ceremony there has become a  popular choice for weddings.

With today’s building boom, Joe has trouble finding enough help, both skilled and unskilled. He’s finding the new Haitian immigrants to be good workers who are interested in learning masonry skills.

And what’s it like to work with very wealthy people unused to the delays and glitches that can happen when you’re trying to build on an island where every nail has to be imported? “Everybody I’ve worked with has been pleasant,” Joe says.” I keep trying to retire, But folks need me. What can I do?”

return to main page of Meet
the Locals