“Living inside a Coleman lantern” 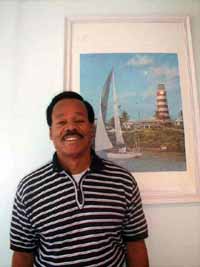 “Like living inside a Coleman lantern,” is how Henry Sawyer describes his 25 years tending lighthouses throughout the islands of the Bahamas. The man who introduces himself as, “Henry as in the Eighth, Augustus as in Caesar, and Sawyer as in Tom,” was born on Harbour Island and sought adventure as a lighthouse keeper.

In the photo at right he is seen in front of a painting of the lighthouse at Hopetown where he worked in the 1960s. While it might sound like an easy job, it actually entails strenuous work, he says. The lights operated on pressurized kerosene, and required daily manual pumping to maintain a pressure of 75 pounds. Most of the lighthouses today are electric, but a few still operate the old way.

Henry lives in Nassau since a back injury ended his pumping days. He comes back to Harbour Island frequently to visit friends and family. Henry is a gently articulate and literate man who originally passed his time reading as many lighthouse tenders do. “But I am a very social person, and I soon realized that I could come down from the lighthouse and socialize with the people in the town and its visitors,” he says. Henry has also dreamed of a performance career, and if you’re lucky and a night owl, rumor has it that you might catch him at the Vic Hum some night singing songs from “HMS Pinafore” or putting on a humorous little dance with his cane. Henry loves people. “What beautiful creatures we all are,” he says. “Whenever I give a speech, I never start with ‘Ladies and Gentlemen.’ I prefer to say, “My fellow human beings.” And then he launches into quoting the poem “Abou Ben Adhem” which ends with Abou telling an angel, “Write me as one that loves his fellow men.”

Return to main page of Meet the Locals 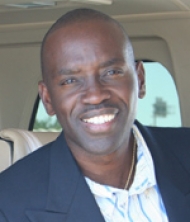